How “The Kids Are All Right” should have ended – copying straight values into gay life is sexist. What do you think? 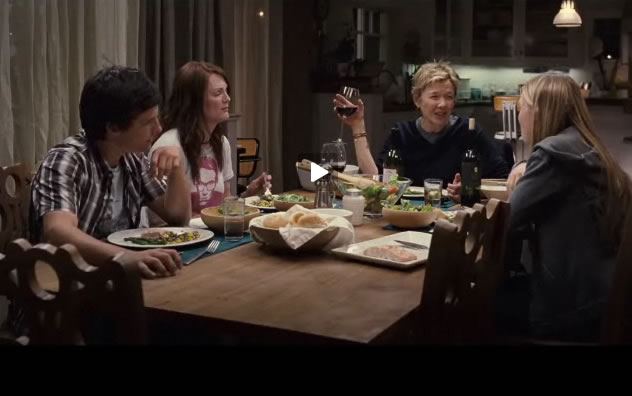 If you are gay and haven’t seen “The Kids Are All Right”, then you ought to make a trip to the movie theater this weekend. The movie is about a lesbian couple (Nic and Jules) with two kids, one of which decides to contact the donor of the sperm that was used for the pregnancy.   The kids befriend the sperm donor (Paul), played by handsome Mark Ruffalo, while Jules ends up having lots of sex with him while working on his yard.

Paul falls for Jules and there is a shower scene in which Jules is conflicted about her feelings towards Paul – are heterosexual sex and feelings towards the father of her children forbidden because Jules is a lesbian?

The connection between Paul ( owner of an organic restaurant and an organic co-op ) and Jules ( spiritual, new agey, right-brain hippie ) is depicted in the movie as an attack at the lesbian relationship, even though Paul is the “father”  of their kids and despite their close connection through common interests, values and outlook at life.

After finding out about the sexual relationship, Nic throws Paul out in order to “protect their family”.   Paul comes back and ask for another chance, but they throw him out and dont want to see him again.

Why the current ending sucks:

Current ending sucks because the director copies the values of straight relationships and the dynamic of “straight affairs” into an intricate gay relationship. Gay relationships are so much more complicated and involve so many variables that are absent in heterosexual relationships that “copying and pasting” makes little sense.  If this were a man-man relationship the same would apply.

Paul apologizes to the entire family and is not rejected. He is incorporated into the family as the father and the lesbians accept him.  This is what I was looking for when I went to see the movie after reading all the raving reviews.  Instead I was presented with another version of what i have already seen in 100’s of movies about straight relationships and their drama.  I was expecting a more “natural” and “earthly” relationship strategy that incorporates all energy sources and all love links into a relationship that is not threatened by love for another.